I was way overdue for a “masturdate” so @_cmikk is home with the kids and I’m out killing time before heading to the @marvelbar panel about their Dry menu. Step one, an amazing Vieux Carre here @spoonandstable - a bar that is staffed by friends and a place I simply can’t leave in a bad mood.
With this view of our plane from the @delta Sky Club at @flysfo - I’m wondering if the pilot will just wave at us when it’s time to board. Gonna miss this sunshine San Francisco - it’s fifty degrees colder at home.
It’s a perfect 66, sunny, and clear here in San Francisco. It’s impossible to be crabby when it’s this beautiful, but it’s possible to eat crab. (And clam chowder.) Awesome food, good cocktails, and an amazing view of the bay bridge. I’d say it doesn’t get better than this but we’re about to go find some ice cream so it just keeps getting better.
High on my list for this trip was @pch580 and it didn’t disappoint. They have some flavor combinations that knocked my socks off and of course I was pleased to see a lot of sherry on the menu. Glad we arrived at open because it was packed within 30 minutes.
Presenting the #tduniversity Linguistics (OF Glass) and Computer Science (Highball) - also known as the two University of Minnesota departments making this trip possible.
Oops, we cocktailed again. Chris thought we were getting a car to a coffee shop he remembers but it dropped us outside @truelaurelsf so here we are. @sightglass is around the corner (on the way to @trickdogbar - uh oh) so we will get there, just not yet. I’m enjoying the delicious and booze-free “Spice & Everything Nice” with @seedlipdrinks spice, chamomile, pink peppercorns, pear vinegar, and aromatic bitters. It’s rich and complex, and doesn’t need alcohol to be interesting. @_cmikk has the Laurel Martini which tastes like California.

I am working hard on bringing more of the travel aspect to this blog – one has to get to the right context somehow! As part of that, I’m working to create useful Google Maps for people to reference when they want recommendations in places we’ve been. It’s a fun project and is getting me very excited for our upcoming trips!

I kind of failed at blogging my trip. I’ll try to get caught up. Migraines prevented me from getting to as many beer places as I’d have liked, but I still did pretty well.

Here’s what came home with me. It took two suitcases and a lot of luck!

From England:
From Wales:
From Spain:
Glassware and Other Booze

You know what would go well with a suitcase FULL of beer?? Some breakable glassware and other booze!!
Left to right:

Not much to report today. We travelled from Galway to Fossa via Dunratty Castle, Adare, and Killarney. The castle and attached folk park was nice. The tour guide was enthusiastic, funny, and knowledgable. Having an enthusiastic guide really makes things more fun.

Both Adare and Killarney were cute towns but mostly just shop after shop of the same stuff. It’s hard to get excited about an Irish wool scarf when you’ve seen the same one in a dozen shops in multiple towns. Yes, they say “made in Ireland” but I have to wonder, by whom? Or by what?
We’re spending tonight and tomorrow at a lovely country inn just off a lake. After two nights of city noise, tonight we’re more likely to hear moos. They served us a beautiful dinner, though I was a little disappointed by the beer list. Heineken on tap, Coors and Budweiser in bottles. I had wine.
Tomorrow we tour the Ring of Kerry, Muck Ross gardens, and then have a “traditional Irish evening.” I’m a little skeptical about how traditional it’s really likely to be, but I guess if I think of it as an “Ireland Theme Park,” as it was described by someone at the bar last night, then it should be okay.
But if THEY don’t at least have Guinness, I will be starting a riot.
P.S. I have no way to transfer my many photos off cameras onto my new iPad mini so sorry these are so text heavy. Trying to take a few photos with my phone and uplad those to break the monotony.

I posted some photos last night before passing out, now I`ll try to fill in some story while I`m a bit more awake. Hotel wifi isn`t connecting right now so no idea when this will post but I`m typing it at 9:30pm on Monday from our hotel in Galway

The flight from JFK to Shannon was only about six hours and between takeoff, landing, and meals I only got about three hours of sleep. That made for a very long day as it was straight onto the tour bus and off to the Cliffs of Moher. It was a bit of a hike uphill to get to the top of the cliffs but what a view! It really was amazing.

From there we drove through the Burren, a huge area of land carved by glaciers and made up mostly of rock. We drove through that area on our way to Galway. Despite being told to prepare for chill weather maxing out around 65F, we hit a heat wave with 75 or so. Oh, and the AC on the bus wasn`t working. The warmth of the bus plus the lack of sleep made the whole bus a bit drowsy and crabby so arriving at the hotel, I think we all ran to the showers.

After a bit of time to rest and clean up, our tour leader, Willi, took some of us on a walk through the main section of Galway, to get a better idea of the area. Then it was a lovely dinner in the hotel before crashing quite early and quite hard.

Today we were up for a good Irish breakfast and the on our way through the Connemara region to Kylemore Abbey. The Connemara region was starkly beautiful. Rocky wet soil has made it difficult for farming or settling and so we could drive many miles between houses. Even the flocks of sheep were rare. I found it kind of haunting and wanted to get out and hike through the deserted land and hills. As someone with little to no interest in athletic activity, it was an odd place to get the urge to go hiking.

Kylemore Abbey was a lovely “modern” castle, built about 150 years ago by Mitchell Henry as a “love letter” to his wife. It was a nice estate with a small church. There were also some big Victorian gardens, but time was running short so we skipped those. We drove back through more of Connemara Nation Park and passed by an old bridge featured in the classic John Wayne movie, The Quiet Man.

Upon returning to Galway, we did a bit of shopping and then had fish and chips at McDonaghs, apparently a bit of a local institution. After popping in to several pubs on the high street of Galway, only to be disappointed by the beer selection, we walked about half an hour to the Salthill area on the water so that I could finally get my hands on some good beer. It was worth the walk, especially given the long chat with one of the employees of the bar/brewery. I think I`ll let the beer info be a second post.

Tomorrow we pack up here and head to Killarney via Bunratty Castle and Adare. I`ll be back whenever I get WiFi!

Firstly, I wasn’t feeling great last night (Sunday) which isn`t surprising given the lack of sleep and the heat on the bus. A few people got a pint before dinner but I needed rest. Then we had lunch at the Kylemore Abbey and the only beer option was Amstel Blue if I recall correctly. There was some beer on the bus, but cans of Budweiser and Heineken.

First pub? Nope. The only Irish Beer I hadn`t heard of was Bearmish Irish Stout, and they were out. But the bartender mentioned a pub up the road that brewed there own. So we wandered up and found a sign for their beer, brewed by Galway Hooker (a large brewery, not in Galway). Hey, at least it was unique so I`ll give it a shot. It`s a vanilla porter, I like that. Or I probably would like that if they had any left. Boo, Beer strike two.

Finally Mom and I decide to walk to what was our original plan all along…Oslo. Yes, a bar named Oslo in Galway. But the bar is attached to Galway Bay Brewing. Apparently we missed the speech an employee gave to a group of tourists but he ended up sitting with us and having about a 45 conversation about the craft beer scene in Ireland and America. I got a few tips for breweries to look for in Dublin and where to buy bottles to bring home.

I started with the Galway Bay Irish Red Ale, it was really tasty, smooth, and balanced. Then I was going to try their stout but the brewery employee chatting with us actually recommended the oatmeal stout from Trouble Brewing. It was a good suggestion. So good that I finished my half pint before I even realized it. Malty, smooth, with just a hint of bitterness on the finish.

It took almost 36 hours on the ground in Ireland for me to get my first beers, but it was worth the wait to get something good and local. Now, it`s time for another night of sleep so I am ready for another full day. 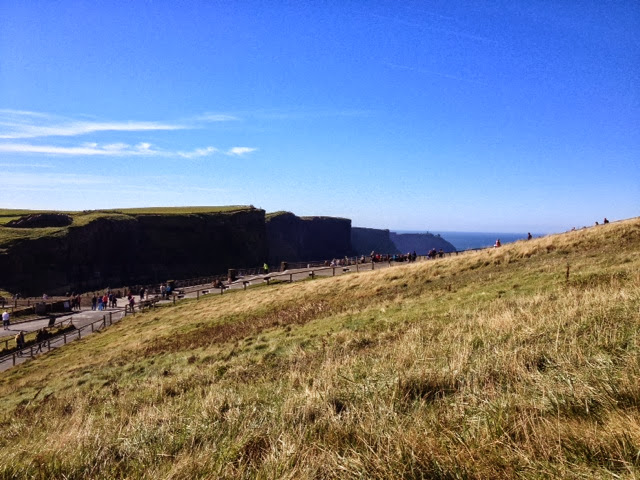 Drinking In Context
Create a free website or blog at WordPress.com.